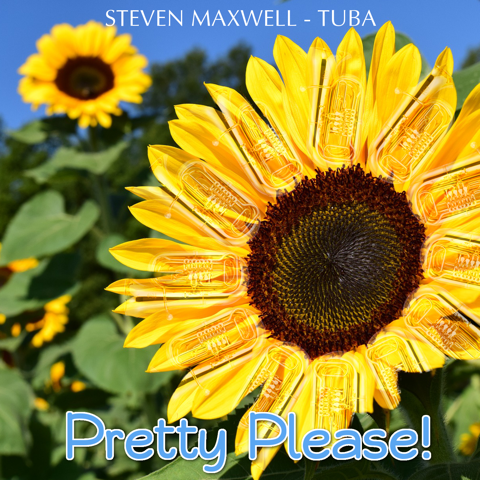 The history of the tuba is much shorter than most instruments of the standard orchestra. The instrument has a particularly short history when it comes to solo literature. Although recently there has been good quality music written for the solo tuba, it will take time for the repertoire of the instrument to match that of its instrumental counterparts. Over the years, I have worked to beg, borrow, steal, (and pay) to create more beautiful and exciting music for solo tuba. This album is a zenith of that effort. The title of this album is drawn from my relationship with the composers represented on this Album. Each work was commissioned or written for me over the years. It is my pleasure to record and spread the word about these fantastic new pieces for solo tuba and various supporting ensembles.

Rhapsody, Op. 94 (2016) -- Daniel Baldwin (b. 1978)
Rhapsody was written for tuba and piano or bassoon and piano. It was composed in 2016 for Susan Maxwell, to be premiered at the 2016 International Double Reed Society Convention, Columbus, GA. The version for tuba was premiered by Steven Maxwell at the 2017 Great Plains Regional Tuba and Euphonium Conference at Iowa State University.

Born in 1978 in Blackwell, Oklahoma, Daniel Baldwin has become a highly sought after and widely performed composer. His music has been described as "refreshingly beautiful", "gorgeous and moving", and "beautifully inspired" by critics around the country. He is an award-winning composer who has been commissioned by performers from the top orchestras in the world including the New York Philharmonic, Chicago Symphony, and National Symphony Orchestra. Baldwin’s works are all published by Imagine Music Publishing.

Rhapsody is a one movement piece that reflects various moods and a modern aesthetic. It follows a rhapsodic flow, where the forward motion of the theme carries the listener to several other musical areas before returning to the main theme.

Sy Brandon (b. 1945 in New York, NY) holds the rank of professor emeritus of music from Millersville University, Millersville, PA where he taught low brass, composition, orchestration, music history, electronic music, and music industry for twenty-four years. He received his B.S. and M.S. in music education from Ithaca College and his A. mus. D. in composition from the University of Arizona. His composition teachers include Warren Benson, Elie Siegmeister, and Robert McBride. His music has been recorded by the Czech National Symphony Orchestra on the Albany Records Label, the Philharmonia Bulgarica and the Kiev Philharmonic on the ERM Label, Emeritus Recordings, the Contemporary Record Society, and by the Swiss Duo Dilemme on the Arizona University Label.

Interplay was composed during 2012 for the Maxwell Trio, an ensemble consisting of Kansas State University faculty members with the unusual combination of instruments of bassoon, tuba, and piano. The title of this three-movement work was derived from the large use of counterpoint throughout the composition. The first movement is in a quasi-sonata form. The second movement is in an ABA form. The middle section of this movement uses an ostinato to accompany the melodic interplay. The last movement is lighter than the first two movements and utilizes a loose rondo form. Its allegro tempo and frequent meter changes add a humorous quality. The interplay in this movement relies less on counterpoint. Instead, the shifting of colors through alternating the melodic material among the three instruments creates interplay between sections within the rondo form.

Maxwell, dectet for solo tuba and chamber ensemble was written in 2016 for Steven Maxwell and the Kansas State University Faculty Chamber Ensemble. The work is dedicated to Roberts children: Robby, David, Benjamin, and Kathleen.

Robert Denham states of Maxwell:
Any creative work must be influenced by the time and place it was written. The “when” and “where” must make itself felt within the fabric of the compositional process. And so, it was that when I set to work on this, I found myself at the end of a satisfying summer, filled with warm memories of spending large amounts of time with my wife and four children. The memories were quite diverse. They included, among numerous others that are not mentioned here: days at the beach in Lake Tahoe, hikes amongst various groves of redwoods and giant sequoias, panning for gold, camping out beneath the stars, steam train rides and visits to several historic sites in California. I felt the need to express gratitude for all these experiences through music.

I worked with Steven Maxwell some years ago when he commissioned and premiered my Concerto for Tuba with the Kansa State University Wind Ensemble. As we set out to collaborate on this new work, I could not help but capitalize on the opportunity represented by his last name. While of course the piece is written for him and so the title might seem if not entirely fitting at least awkwardly appropriate, the name “Maxwell” holds an even stronger significance with regards to the theme of “time and place” mentioned above. It just so happens during our summers as a family, it is normal that the end of each day culminates with my children relaying their exploits to a stuffed puppet Canadian goose named Maxwell. In this sense the goose, held and operated by me, acts as a sort of diary or journal; the children relive their experiences by carefully laying out the details before his watchful eyes and listening ears. At the end of their stories, Maxwell give a loving peck to each child and then the children go to sleep (or at least that is the plan on paper).

This piece is programmatic in the sense that the introduction and closing passages represent the warm glow of the moments I spent with them during these bedtime moments. Between these boundaries, the work visits several different eclectic scenes depicting the active imaginations of my children, augmented as they so easily are by the eventual setting in of a deep sleep.

Joshua D. Britt started composing and arranging music when teaching as a band director and general music teacher in the public schools. Small schools demanded arrangements for unique sets of instrumentation and Josh expanded on this by writing original works for chamber and solo groups of musical instruments. Playing and writing folk, rock, and country music along with his classical music training led to finding ways to blend the styles together. Josh received a Masters of Music degree and a Doctor of Philosophy degree from Texas Tech University in Music Composition. He was on the faculty of Kansas State University from 2009 to 2015. Though he wrote large-scale works, his chamber and solo works were his greatest passion. Shedder’s Corner is published by Cimarron Music.

Joshua Britt states of Shedder’s Corner:
“I like to think of a place and let it inspire melodies that come to mind. The Shedder's Corner really means a scenic meeting place. Shedder’s refers to the family that lived in the big, red-brick house with a silo on the corner. You don't see many red brick silos anymore that are in such great shape. There was always a milo field across the road and of course lots of other fields, tall grass, trees and other countryside landscaping. It is country scene, and we were always meeting people there, driving onward to school or somewhere else so the melody has a little drive to it.”

Dr. Paul Hunt is Professor of Trombone at Kansas State University in Manhattan, Kansas. He
teaches trombone, world music, jazz history, and is the Music Director for the musicals
presented annually by the KSU School of Music, Theatre, and Dance. He is a member of the KSU Faculty Brass Quintet and Faculty Jazz-tet.

A native of Rapid City, SD, Hunt earned the DMA in Trombone Performance as well as the Performer’s Certificate from the Eastman School of Music, an MM from Youngstown State University and the BM and BME degrees from the University of Northern Colorado. He returned to UNC in 1992 for a year of post-doctoral study in trombone pedagogy and jazz. His primary trombone teachers are E. D. “Buddy” Baker, Vern Kagarice, and John Marcellus. A long-time member of the International Trombone Association, he served as the association’s President from 1998-2000. Hunt is an active performer and clinician. He has appeared at numerous trombone workshops and festivals. He continues to give solo recitals, performances, and master classes throughout the Midwest.

Hunt’s compositional influences stem primarily from classes in theory, styles, and musical analysis taken with Robert Wason, Robert Morris, and Christopher Rouse while a student at Eastman, and to years of playing and teaching jazz and new music.

ABSURD: FROM Latin absurdus "out of tune, foolish"

- Bosh: Empty talk (Biorhythms)
- Cockeyed; an absurd, improbable story presented as truth (Mood Ring)
- Obviously contrary to all reason or common sense (Pet Rock)
- Black Humor; a form of humor that regards human suffering as absurd rather than pitiable…but somehow comic. (Zip to Zap)
- Unpredictable; neither designed nor predictable but irrational and meaningless. (The Bob Bridge)

Similar to an earlier work in this medium, RE:MemoRandom for Bob (2007) for trombone and digital sound media, one might call this music “digital musique concrete” mixed with a live instrument. Many of the sounds for Absurdities were either found on the internet, or were created by using and manipulating recorded sounds made specifically for this project, including the reading of a script fashioned by the composer from prose materials found on the internet.

The composer once upon a time carefully charted out his biorhythms, owned a mood ring and remembered watching a news broadcast about the debacle surrounding putting “Zap on the Map.” He also painted a smiley face on a flat rock, but it wasn’t accepted by his friends as an official Pet Rock.

I am indebted to my friends whose voices can be heard on the recorded material: Steve Maxwell, Amy Rosine, Ralph Titus, Dwight Tolar, and Julie Yu-Oppenheim. This work was written for my good friend and colleague, Steve Maxwell. His son’s name is Bob.

Steven Maxwell, tuba
Dr. Steven Maxwell is Associate Professor of Tuba and Euphonium at Kansas State University. In addition, he teaches brass techniques and the History of Rock and Roll. Dr. Maxwell is also the tubist with the K-State Faculty Brass Quintet and the director of the K-State Tuba Euphonium Ensemble. He is an active clinician, adjudicator, and soloist throughout the United States and Europe. Dr. Maxwell has performed at prestigious conferences including the International Tuba and Euphonium Conference, the U. S. Army Band Tuba-Euphonium Workshop, and the International Trombone Festival. He has also performed at numerous regional conferences over the years including the Great Plains, South Central, Rocky Mountain, and Southwest Regional Conferences. Dr. Maxwell is a champion of new music for the tuba and euphonium and has commissioned over fifty works for solo tuba, solo euphonium, and tuba-euphonium ensemble.

He has held the position of principal tuba with the Chautauqua Festival Orchestra, Central Iowa Symphony, Kansas City Puccini Festival Orchestra and has been a member of the Fountain City Brass Band. Dr. Maxwell is an associate editor for the International Tuba and Euphonium Association (ITEA) Journal. He is a member ITEA, Phi Mu Alpha Sinfonia, and is an honorary member of Kappa Kappa Psi and Tau Beta Sigma.

Dr. Maxwell is proud to be a Miraphone Performing Artist.